Many Investors are turning to the Miami River

The uprise of the Miami River – A long overseen area

The Miami River has long been overseen as investors were looking at the Bay and the Beach areas of Miami. During Miami’s last real estate boom, glitzy condo towers went up near the river’s mouth, including Ugo Colombo’s Epic Miami Hotel and Residences. More than 7,000 residential units were built during that time, according to the Miami River Commission. Due to the economic downturn the expansion of this residential boom did not reach out to the rest of the Miami’s 5.5 mile river.

Nowadays, Miami is following in the footsteps of other American cities, including San Antonio, Savannah, Pittsburgh and Chicago, who have turned their rivers into meandering, walkable neighborhoods with commercial and residential districts.

The Miami River is now attracting more and more high-end restaurants. As a hip, transitional area in Miami, the Miami River is following the steps of neighborhoods like Lower East Side and the Meatpacking District in New York. They used to be no-go zones and now they are a hotspot where everyone wants to be seen. With the arrival of Seaspice (previously Seasalt and Pepper) and the River Yacht Club a new crowd was attracted to the River area who rebranding this area, formerly known for its tug boats and fishing trawlers of the working river, into the place to be.

Other local eateries that are popular amongst locals and visitors alike are Garcia’s Seafood Grille, Fish Market and Casablanca Seafood Bar & Grill

Other upcoming openings are SushiSamba (with locations in Miami Beach and Coral Gables) and London based and Duck & Waffle. Both establishments will be located in a brand new, funky, 4-story riverfront building near the Flagler Street bridge.

Real estate investing conglomerates from around the globe are ready to buy waterfront lots in the Miami Area.

The Miami River Commission says that a total of about 4,000 units are slated for development over the next few years, along with new hotels, restaurants and a mega-yacht marina. The promise of Brickell City Centre, a $1 billion mixed-use project with luxury shopping that is under construction between SE 6th Street and SE 8th Street on South Miami Avenue, is also luring developers to the river’s mouth.

The Skyline Defining statement of Miami’s riverside renaissance. One River Point is going to be an ultra luxurious project along the Miami River. Two soaring symmetrical towers join in a stunning glass Skybridge 800 feet above the Miami River. Affording unrivalled vistas of river, downtown, bay and ocean beyond, it achieves a unique synthesis of art and nature in one standout architectural statement. Only 193 designer finished residences per tower which are 1-4+ Bedroom Residences ranging from 890 to 5,700 SF and bespoke Penthouses, Sky Lofts and Sky Villas from 5,000 to 12,000 sq ft with expansive terraces and private pools

For pictures, residence information and floor plans of One River Point click on the link

When completed, River Landing shops and residences will span 8.14 acres with 426,000 square feet of retail and restaurant space, 475 apartments, a supermarket and a riverfront park. Foundation work is expected to begin in April, according to a news release. The $300-million project, located at 1400 Northwest North River Drive, will be complete from the summer of 2017 to the spring of 2018

River landing shops and residences will offer 2 million SF of retail and residences on 8.14 acres along the Historic Miami river in the heart of Miami’s Health District. Located at 1400 NW North River Drive, the mixed-use development is within walking distance of Miami’s Civic Center area, home to the second largest health district in the United States, and the judicial hub of Miami Dade County’s court system. River Landing is designed to transform one of South Florida’s most densely populated employment centers into a thriving full-service community that will feature a myriad of retail, dining and entertainment choices. The national trend of urban centers driving retailers growth is on full display at River Landing. The $300 million project is attracting national and regional tenants by offering 426,000 square feet of retail and restaurant space in addition to 475 luxury apartments, 2,200 parking spaces, green space for enjoyment and a 1,500 lineal-foot riverfront park.

A 817-foot tower is proposed to be build next to the EPIC Hotel and Residences along the Miami River. The project is said to include 384 residential units and 561 parking spaces. It will be built at 300 Biscayne Boulevard Way, on the former Epic East site.

Condo units will be expensive and luxurious, with features such as private elevators. The company, which is controlled by Argentina’s Cotto family, paid a record $125 million for the 1.25-acre property last year – equating to an average land cost of $326,000 for each of the proposed 384 units (or $115 per foot of proposed residential F.A.R.).

The proposed sail-shaped tower would be developed by Developer Riverwalk East Development, LLC and feature the typical luxury amenities like a spa and pool deck, along with the 70th-floor lighthouse. The architects listed are Revuelta Architecture and Argentina’s Bodas Miani Anger.

Read our related news and articles on the Miami River 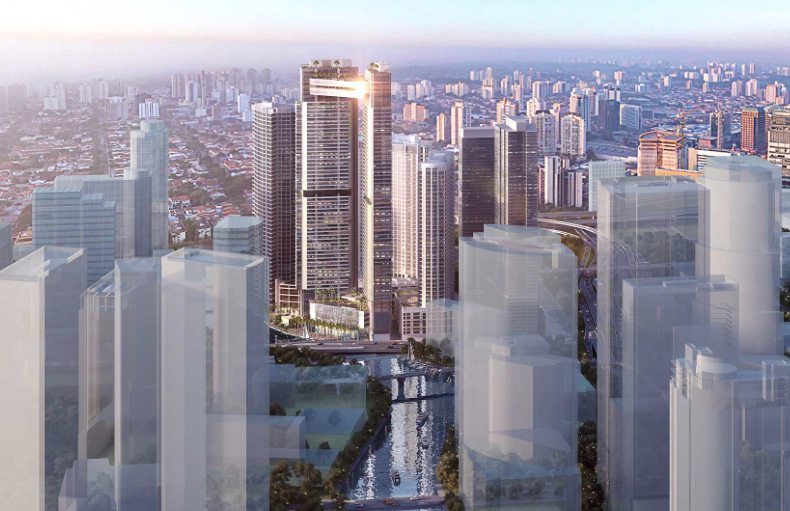 The Miami River Area- Miami’s newest investment hotspot   A few weeks ago the David Siddons Group already reported on the Miami River area being the next best thing for real estate investors. Today, the […]